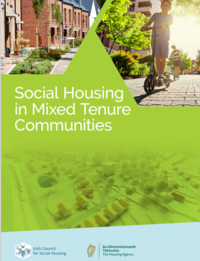 A report being launched today (31st March), commissioned by the Housing Agency and the Irish Council for Social Housing (ICSH) and carried out by Professor Michelle Norris and Dr. Aideen Hayden of UCD finds that strong and integrated communities have developed among the private and social housing residents in mixed tenure estates, and that there is overwhelming support for tenure mixing as a key policy to combatting socio-spatial segregation. Over the past twenty years, the percentage of Approved Housing Body (AHB) owned or managed social housing located in mixed tenure estates has increased from 20% to 78.2%; this reflects state policy objectives and measures such as Part V.

The report, Social Housing in Mixed Tenure Communities, looks at social housing provided by approved housing bodies (AHBs) in mixed tenure developments, the reasons why decisions are made to cluster or disperse social housing in these estates and how well these models work from both AHB staff and tenant perspectives. An important key finding is that both clustered and dispersed social housing has worked well, despite the consensus in favour of the dispersal of social housing. ‘Tenure blind’ design of mixed tenure housing was considered more important (in both the research literature and case study interviews) for the integration of residents of different tenures than the location of the social rented dwellings. This can be applied in both clustered and dispersed settings.

The report also identifies that high standards of housing management are important for the success of mixed tenure estates but that management can be challenging, particularly in view of the stigma that still attaches to social housing. Approved housing bodies’ strong record in this regard is identified as another factor contributing to the success of the case study estates.

“This report documents a success story that needs to be shared. The majority of the AHB tenants, private owners and private tenants interviewed for the research agree that tenure mixing is positive. Also, initial homeowner preconceptions about AHBs and social residents becoming their neighbours, were alleviated over time. Interviews with social residents reveal that community integration in general is of greater importance than the location of their home, and that non-housing amenities, such as playgrounds and inclusion in residents’ committees can help cement the bonds of community. Critically too, the research interviews with AHB CEOs and staff did not identify any great difficulty in the management of mixed tenure over single tenure estates. The sector has the skills and knowledge required.”

The research identifies additional factors, such as procurement and funding models, as well as estate design, which influence the delivery and location of social housing in mixed tenure estates. A significant finding of the analysis is the important role that social housing plays in underpinning the financial viability of market housing provision in mixed tenure estates. The practical advantage for social landlords of purchasing whole apartment blocks for social housing, and the benefits this offers to developers faced with the upfront financing required to develop apartment blocks is helping to drive the clustering of this tenure. The report calls for a holistic assessment of the impact of residential density guidelines (intended and unintended) and research on ways of achieving density without relying entirely on high-rise.

Co-Author of the report, Professor of Social Policy and Director of the Geary Institute for Public Policy, UCD says:

“This research represents important learning for us. The socio-economic issues arising from the spatial concentration of low-income households and the impact of social mixing have been much studied internationally. However, the volume of Irish research has been small. The lack of information on tenure mixing in Ireland represents a critical knowledge gap and its implementation as a policy may also be challenged given current developments in housing policy. This research aims to bridge these information gaps and raises important considerations for housing policy such as design (tenure blind) and layout, the tenure mix of neighbouring communities, density issues, appropriate funding to support management fees and planning and housing policy to support the monitoring of socio-spatial segregation.”

“The Housing Agency is strongly committed to promoting sustainable communities through mixed tenure. Approximately eight out of every ten homes owned or managed by Approved Housing Bodies are in mixed tenure estates and this proportion is likely to grow in the years ahead. This research shows that tenure mixing can improve the quality of life of the residents of all tenures and it can benefit surrounding neighbourhoods as well. Key to community integration is ‘tenure blind’ design, good estate management, the provision of amenities including playgrounds and community centres, and the work of residents’ associations. The Housing Agency is pleased to have supported this research and we look forward to advancing its recommendations.”

A video recording of the event is available on our YouTube channel here.

About The Housing Agency

The Housing Agency is a Government body working with the Department of Housing, Local Government and Heritage, local authorities and Approved Housing Bodies in the delivery of housing and housing services. The Agency’s vision is to achieve an integrated housing system, meeting the nation’s housing needs and promoting sustainable communities. It does this by providing evidence-based housing insights and data that inform thinking and policy-making; by working with others to enable the delivery of housing solutions and to implement programmes and actions in Government housing policy; and by equipping itself and its stakeholders with the capacity required to respond quickly and effectively to challenges in the housing system. For more information, visit www.housingagency.ie or follow The Housing Agency on Twitter and LinkedIn.

About the Irish Council for Social Housing

The Irish Council for Social Housing (ICSH) was established in 1982 and is the national social housing federation of nonprofit voluntary and other national housing associations. The ICSH represents approximately 270 member organisations that own and manage 45,000 homes and house 100,000 people including families on a low income, older people, disabled people and households experiencing homelessness. ICSH members operate in every local authority area in the country and in over 500 communities across Ireland. www.icsh.ie

Professor Michelle Norris is UCD Head of the School of Social Policy, Social Work and Social Justice and teaches social policy on the Bachelor of Social Science and Master of Public Policy degrees. Her teaching and research interests focus on housing policy and urban regeneration, particularly on: the management and financing of social housing; the regeneration of social housing estates and inner urban areas; comparative analysis of housing provision in Europe and the history and socio-economic implications of Irish housing policy and its relationship with the welfare state. She has led over 20 research project on these issues since 2000 and produced 50 publications on the results. In 2011 she was appointed by the Taoiseach as an independent member of the National Economic and Social Council (NESC) and in 2012, was appointed by the Minister for the Environment as Chair of the Board of the Housing Finance Agency.

Dr Aideen Hayden is a PhD graduate of the school of Social Policy, Social Work and Social Justice and received a 2016 UCD Alumni Award for Social Science. She is a former Senator (former Seanad Eireann Spokesperson on Housing, Children and Youth Affairs, Spokesperson on Finance and Spokesperson on European Affairs, as well as Vice-Chair of the Joint Oireachtas Committee on Finance, Public Expenditure and Reform). For almost three decades, Aideen has served as Chair of Threshold, the leading advice and advocacy organisation working on behalf of tenants in the private rented sector. 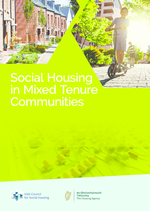 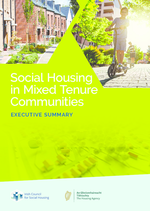